The Italian media has reacted to Juventus’ Champions League elimination, with most condemning referee Michael Oliver for awarding a last-minute penalty against Real Madrid.

The Bianconeri were 3-0 up with the match heading to extra-time, but Medhi Benatia was adjudged to have fouled Lucas Vazquez in the box and Cristiano Ronaldo converted the penalty.

This morning’s Gazzetta dello Sport leads with “the rage and the pride”, and its match report continues on that theme.

“It will always be a night of regrets, this one in Madrid, and of anger. Regrets for a dream which only vanished thanks to a very questionable penalty in the 52nd minute of the second half, with Buffon sent-off for his protests and the Bernabeu terrorised by an elimination which hadn’t even been considered.

“Regrets for an impossible undertaking which was being succeeded in, deservedly, because there was the most beautiful, concrete and strong Juve ever seen.

“Regrets because after Messi also Ronaldo, the best in the world, was kneeling to Italy.”

The newspaper also discussed the Juventus anger, after the penalty awarded against them in the final seconds.

“This was nothing like Cardiff, this was not a Juve which suddenly collapsed, but a team worthy of the final in Kiev. First, unfortunately, there was the sad end in Madrid.

“Benatia, who challenged Vazquez from behind, took the ball. Perhaps also the Spaniard, perhaps not. In any case, in recent times, when in doubt the referees decide for Spain.”

Gazzetta’s referee analyst admitted VAR wouldn’t have changed much, and also that Benatia’s challenge could have been considered a foul.

However, “every referee knows that there are times when whistling has a different weight, and therefore only the most obvious fouls are punished”, concluding “Oliver, a 33-year-old Englishman, showed he was not up to the challenge”.

The newspaper believes the contract from Benatia was “light” but “the referee is adamant and Ronaldo, always him, doesn’t quail from the spot”. In conclusion “everything perfect up to that accursed penalty”.

La Stampa opens with “the beauty of football. And its cruelty”. According to the Turin newspaper “Juventus built their masterpiece, reduced Real and came back from 0-3, but nine seconds from the end, on the brink of extra-time, an accursed penalty stole their dream”.

That spot kick “ruined everything, including Buffon’s farewell to the Champions League. The dream was stolen, the feat cannot be touched. It hurts to go out like this”. 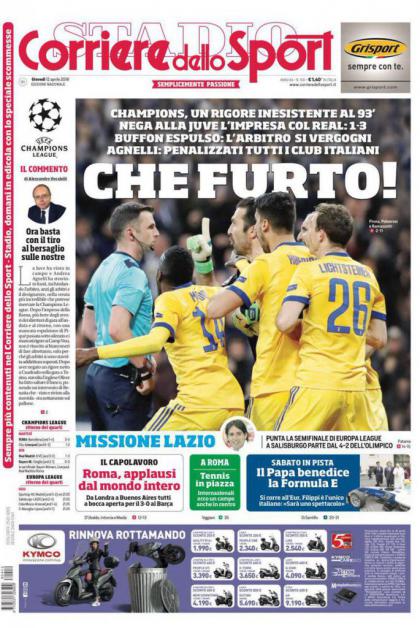 Today's Corriere dello Sport front page describes what happened as “a robbery”, while the match report talks of “an incredible ending, the bitterest possible for Juventus”.

In an opinion column, Alessandro Vocalelli states that Benatia “clearly won the ball” and accuses officials of “ a system that continues to diabolically penalise the Italian teams in Europe”.

“They tried in vain to incinerate Roma, they penalised Milan and Lazio with a succession of contrary decisions” he writes, stating that Madrid “celebrated a qualification sealed with the referee’s decision”.

Tuttosport noted that Juventus made a mistake to even allow Vazquez into position for the penalty call, “but for Juventus it’s an incredible joke. An undeserved ending. Just as Buffon does not deserve to end his career in Europe with a red card”.

The Turin newspaper states that “Allegri’s team deserves only applause” despite the “doubtful” penalty.

“A suspicious contact in the area between Benatia and Lucas Vazquez in the 92nd minute shatters the Juventus dream to pieces,” writes La Repubblica. “Just when extra-time seemed inevitable, the referee Oliver decrees a penalty for the Spaniards. Insults fly on the pitch and Buffon is sent off for his protests. Then Cristiano Ronaldo sends Los Merengues to the semi-final.”

The newspaper writes that “the Moroccan’s intervention seemed to be on the ball, but for Oliver it’s a penalty. Buffon gets his first red card in 117 games and Cristiano coolly beats Szczesny”.