NEWS
Inter vs AC Milan Live Stream: How to Watch the Milan Derby Online and on TV
By Football Italia staff

Eleven Sports brings you live and exclusive coverage of Internazionale versus AC Milan in the UK and Ireland online, on mobile and on TV – Kick Off is at 19:30 on Sunday 21st October 2018 – Click Here to Watch Now!

Despite the struggles of AC Milan and Inter in recent years, the Milan Derby remains one of the biggest games on the football calendar – estimated to be watched by over 800m fans worldwide!

Both clubs have had to look on as rivals Juventus have dominated in Italy's top flight for the past seven years. However, there are clear signs of a resurgence on both sides of the city divide with Luciano Spalletti guiding his men back to the Champions League this season while Gennaro Gattuso will be hoping to follow suit this year.

This fixture though must be viewed in isolation with form going out the window as pride is on the line. In turn, it has undoubtedly produced some incredible moments and memories for both sides over the years. 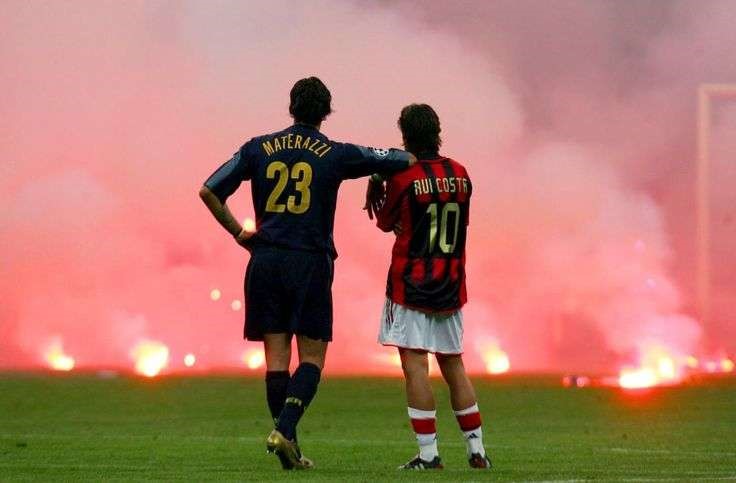 From the ill-tempered Champions League quarter-final clash in 2005 which gave us this iconic image of Marco Materazzi and Rui Costa above as flares rained down from the stands, to the goal scored by Mark Hateley in 1985 which secured a 2-1 victory and made him an unlikely hero with the Milan faithful to this day.

These two sides have produced some classics in recent times too, with no less than 17 goals being scored in the last six meetings in all competitions. From Patrick Cutrone's dramatic winner in extra-time in their Coppa Italia encounter last season to Mauro Icardi's stunning hat-trick in the league meeting. This fixture rarely fails to produce drama and entertainment.

Expect Icardi to potentially be decisive in this one too, while compatriot Gonzalo Higuain will be hoping to have the same effect at the other end of the pitch in a battle between the two prolific Argentine strikers.

That is one of many fascinating sub-plots and battles in this game, from the midfield war to wingers on either side hoping to be influential. However, it could ultimately come down to who outguns the other in a potentially goal-laden showdown.

And the best part of it all is that it couldn't be easier to watch! Subscribe to Eleven Sports today to watch on any device, while easily connecting it to your Apple TV or Chromecast to get it on the big screen.

Not only that, but Eleven Sports provide up to 20 games a week as the new home of Serie A, La Liga and the Eredivisie as well as plenty of other content all for just £5.99 a month, or £49.99 for the year!

So whether it's to catch what promises to be one of the games of the season or to get the dream football package for the rest of the season, sign up with Eleven Sports now and prepare for the Derby della Madonnina this Sunday!