An investigation into Juventus ultras led to the discovery of an arsenal of weapons, including a ground-to-air missile, in the hands of Neo-Nazi extremists.

The Digos section of the police in Turin announced the raid this morning, leading to the arrest of three people, including 50-year-old Fabio Del Bergiolo, a former border security inspector who had been a candidate for the Senate in 2001.

The investigation began when Neo-Fascist banners from the notorious Juventus ultras group Drughi were found in the skinhead Legio Subalpina centre in Turin and eventually led to an extraordinary arsenal of high-power weaponry.

This included multiple automatic rifles, guns, armour-piercing bullets and even a ground-to-air missile currently used by the army in Qatar.

The raids were held all over northern Italy this morning, co-ordinated with authorities in Milan, Varese, Pavia, Novara and Forlì.

“Connections were found between these Neo-Fascist and Neo-Nazi groups and ultras groups, in particular Juventus and the Drughi Giovinezza section,” explained Digos Turin chief Carlo Ambra.

“There are also connections with more traditional Juventus fan groups and other far right militants.” 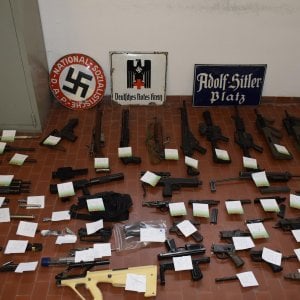