Reports are growing that Franck Ribery has accepted a move to Fiorentina and he hinted as much on social media.

The 36-year-old France international is a free agent after his contract with Bayern Munich expired, ending a 12-year stay at the Allianz Arena.

Das Bild claimed this evening that Ribery had turned down Al Nasr and opted to join Fiorentina instead.

Sky Sport Italia insist the negotiations are continuing, but on the right track, with details including his personal physiotherapist, then a two-year contract worth €4m per season.

He then posted a picture on Instagram with the caption: “Prepared for a new challenge! Soon”

His former Bayern Munich teammate and ex-Fiorentina star Luca Toni replied to the post with a multi-lingual comment.

Ribery responded with a series of emoticons of laughter, winking, an OK hand signal and hearts. 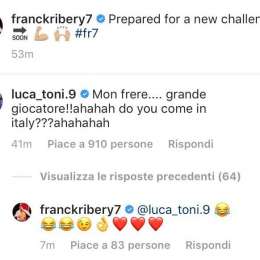