1982 World Cup: Italy against all odds

The Azzurri overcame all the odds, controversy, doubts and even scandal to lift the 1982 World Cup. Vijay Rahaman takes us back to one of Italy’s greatest sporting achievements.

Heading into the World Cup in Spain in 1982, the Azzurri were rank outsiders, but through steely determination, skilful play and a striker catching fire at the right time, they ended up lifting the biggest prize in the game.

Much like 2006, the tournament was preceded by chaos in Serie A. Only two years previously, the Totonero betting scandal hit the domestic game, that led to clubs being relegated, players being arrested and the game thrown into turmoil. Italy still hosted the European Championship that summer of 1980, but the tournament in general was mediocre at best, with Germany beating Belgium in the final.

The manager of the team was Enzo Bearzot, who had been in charge of his country since 1975 and impressively guided a relatively young team to fourth place in the 1978 World Cup. He kept faith with many of those same players four years later, including and very controversially Paolo Rossi. The striker had been implicated in the Totonero scandal, been banned for three years (eventually reduced to two) and had played just three games over the last two years.

He left out Roma striker Roberto Pruzzo, who was Serie A's top scorer that year, a decision roundly condemned by the ever-critical Italian press. No matter what, Bearzot was going to do things his way.

On paper, Cameroon, Peru and Poland did not seem like the most difficult of groups to negotiate, but this is Italy, and they never do things easy. The then two-time world champions did not win a single game in the group, as they drew all three games and scored just two goals. They managed to scrape into the second round by virtue of scoring one more goal than Cameroon, after points and goal difference were even.

Needless to say, the Italian media went into overdrive with their criticism of the team, which led to Bearzot denying press access to the team, as the manager felt that the criticism was of no use to anyone.

Back then, there were two group stage rounds followed by the semi-final and the final, so the second round group Italy were drawn in raised eyebrows. In a group where all the matches would be played in Barcelona, they had to tackle massive favourites Brazil and the defending champions Argentina with a certain Diego Maradona in their ranks. Yes, ladies and gentlemen, they really had to do it the hard way 38 years ago.

They faced Argentina first and it saw one of the most famous man-marking jobs in the history of the game, as Claudio Gentile stuck to Maradona during the entire game like a tick on a dog. It was brutal at times and it's the type of defending that would not be allowed in today's game, but it was effective. The first half saw very little action in either penalty area, as the teams headed to the break scoreless.

That all changed near the hour mark, as a sweeping move found its way to Marco Tardelli and he hit a low left-foot shot into the far corner past goalkeeper Ubaldo Filol. It was 2-0 for the Azzurri 10 minutes later, as a mix-up in the penalty area involving several players saw the ball powered into the goal by Antonio Cabrini.

The next game saw Brazil beat fierce rivals Argentina 3-1. That meant Italy had to beat the Brazilians to qualify for the semi-finals, as they had an inferior goal difference. What took place on July 5, 1982 at the Sarria stadium became the stuff of legend. 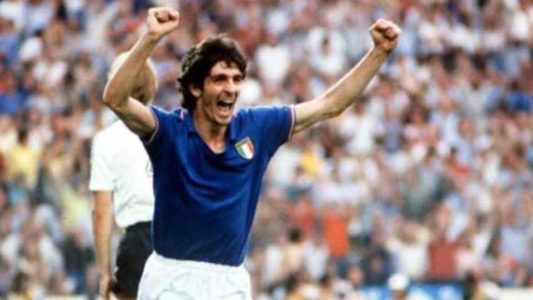 It must be mentioned that Rossi had not scored a single goal up until then, despite starting all four matches, but he was again showed undying faith by Bearzot. Virtually nobody gave Italy a chance facing the free-flowing football of the South Americans with a team containing many players who were either playing or would eventually play in Serie A.

They surprised all and sundry and attacked Brazil as Bearzot, who was well known for changing his tactics to suit the opponent his team faced, sent out the team with a positive mentality in the early July heat. Rossi finally repaid the faith entrusted in him, as in just the fifth minute he headed home a Cabrini cross to put his nation in front. Brazil responded with a brilliant move that epitomized their play in the whole tournament, finished off by captain Socrates.

Italy again took the lead, as Rossi picked up a loose ball, dribbled past the last defender and blasted into the goal. As expected, the South Americans came out all guns blazing for the second half. Junior made a marauding run, passed off to Roma player Falcao and the entire Azzurri defence switched off, as the midfielder put his laces through the ball.

Italy needed the victory and went in front for the third and final time six minutes later. The ball was not cleared after a corner, it was swept towards goal by Tardelli, it was met by Rossi and the striker guided the ball home from just five yards out. BOOM! Giancarlo Antognoni also had a goal incorrectly ruled out for offside, but it did not matter, as Italy held on to progress to the last four.

In the semi-finals, they met Poland and riding the now in-form Rossi, they comfortably triumphed by a 2-0 margin, with the Juventus player scoring both goals via headers. In the other semi-final, Germany overcame France 5-4 on penalties after the match ended 3-3 in extra-time.

The Final in Madrid's Santiago Bernabeu felt for a while as if Italy were cursed to another silver medal, as Cabrini missed the target entirely with his early penalty. However, a quickly taken Tardelli free kick was whipped in and that man Rossi was again there to head home from close range. With the Germans now needing a goal and pushing more players forward, it left them vulnerable to the counter-attack.

Just over 10 minutes later, they won back the ball and it was a five on five counter involving Bruno Conti, Ciccio Graziani and Lele Oriali that eventually was finished off by Tardelli. The multi-purpose midfielder then set off on an emotional celebration that still now is the image people point to when asked why they care about football. His face said everything and there’s not a single sports fan on this earth who did not recognise it.

Spillo Altobelli added another 10 minutes from the end, and although Paul Breitner pulled one back for the European champions, it was 40-year-old Dino Zoff who lifted the World Cup high into the Madrid night.

Have your say...
Marz Cat

I was 14 in 1982. Even at 2-2 v Brazil, I recall feeling so proud of the Azzurri, regardless of the final result. After we beat Brazil, the self belief was indestructible and nothing was going to stop the Azzurri....the rest is history.

@worthless, Zoff made numerous excellent saves in the 2nd half vs Brazil. The Oscar header he saved on the line, as mentioned by Dennis was the most memorable. He also made three other saves worth noting. Narrowing the angle at the feet of Cerezo at the edge of the box is often overlooked in highlight reels, yet a save worth his weight in gold. He also made a save kicking the ball away from Cerezo's feet near the goal line & punching the ball after a dangerously whipped in corner/cross.

@worthless he made a very good save off Oscar’s header that would have made the game 3-3 but apart from that I don’t remember any stand out saves as he was well protected by the defenders. Against Argentina Gentile went beyond what should be acceptable behaviour on the pitch against Maradona and even Scirea, who never got a yellow in his career should have been sent off for the punch on Diego. It was completely out of character.

Many happy memories. Probably my favourite Italy team of all time. The Azzurri actually had a better team in 1978 and should have won in Argentina, but we put it right next time round. In 1982 Italy beat the favourites (Brazil), the defending champions (Argentina) and the European champions (Germany). We also needed a bit of luck. Scraping through the group stage on GD and Zbigniew Boniek missing the semi-final due to a suspension was a welcome boost. But we deserved it - ask anyone in Cameroon!

This was my 1st WC as a kid. I was watching it on tv with my grandparents in Italy. They kept telling me how good Argentina, Brazil and Germany were and Italy's chances were slim. I had no idea about WC at that age. Then I saw Italy take each one of those teams down. All I can say was that I feel lucky to have witnessed this tourney in Italy. People were in the streets singing and blowing horns, it was crazy. The emotions I felt were equivalent to Tardelli's face when he scored his WC goal.

Awesome article. This tourny was a few years before my time. Was always curious, how often/instrumental was Zoff, besides captaining the team? Did he make any game saving saves?

Hey Vijay, your article makes for a good read though you make one error for the semi final. Both goals where not from headers. Rossi's first goal was a tap in & the second was a header. You also make two errors and glaring omissions for Tardelli's 68th minute goal in the Final. The five on five counter you mention included Rossi,Scirea, Conti & Bergomi. Oriali stayed back to cover in defence & Graziani was replaced in the 7th minute due to injury....WELLOOOO Ma che dice!

My favourite World Cup. Brazil vs Italy is up there as the greatest match I’ve ever seen. France vs West Germany is not far behind. That Brazil side is my favourite side and the France team from that year to 1984 had my fave midfield in Platini, Giresse, Tigana and Fernandez. Loved the team just slightly more than the 2000 version. Conti was Italy’s best performer, Maradona’s performance against Hungary was 2nd best individual 1 behind his against Belgium in 1986. Gr8 tourney..