In 1984, Diego Maradona arrived at Napoli for a world record fee with hope that a Scudetto would follow. His first season didn’t pan out that way…

The San Paolo was filled with over 70,000 paying spectators when Diego Armando Maradona climbed the stairs met by an army of photographers and journalists. As he made his way through the hordes of press, he put a Napoli scarf around his neck before looking up to the stands overfilled with both people and expectation. The world’s most expensive football player had officially moved from Barcelona to Naples.

President Corrado Ferlaino had succumbed to the enormous pressure and gone out of his way to make sure Maradona ended up in Naples. He made the Argentina international, who had gained a controversial reputation during his two seasons at Barcelona, the most valuable football player in the game and in Italy he had fought Juventus for his signature.

Ferlaino had also brought in Maradona’s compatriot Daniel Bertoni from Fiorentina and midfielder Salvatore Bagni from Inter, among others, spending 22bn lire to strengthen a wounded squad.

“Good evening, Napoli. I’m very glad to be here with you,” Maradona said to the fans. He entered the pitch, in a circle of people worshipping his dancing feet keeping the ball in the air, before he smashed it towards the stands, let go of a few balloons and was out of there after 15 minutes.

His legs were shaking as he disappeared down the stairs. The intense atmosphere had already got to him. He embraced his partner, crying, knowing that some fans had been on hunger strike until the deal was sealed as another had chained himself to a fence by the stadium.

Napoli had ended the previous season one point above relegation, but the money was more important at the time. Maradona signed the deal when first told about the sporting situation in the south of Italy.

And when he returned from his holiday in Buenos Aires, the fans expected to see their talisman lift Napoli with immediate effect, and despite Bertoni and Maradona hitting it off from the start, the initial impression of Italian football was intense.

The politics in Italy made an impact both on and off the pitch. The north and south were divided. The richer northern cities felt that they were forced to subsidise the poorer regions down south and Napoli, as a football team, very much belonged to south.

According to the northerners, the money wasted by Ferlaino during the summer reflected the inefficiency of the southern regions and the same image repeated itself on the pitch. The northern sides dominated affairs in Serie A as well.

Since the inaugural season in 1929, only four of the Scudetti had gone to teams from the south and Maradona recognised that underdog nature, and if he hadn’t, an opening week defeat to Verona would confirm it. The Gialloblu’s fans were eager to see the 23-year-old and, tongue in cheek, even unfurled a banner at the Bentegodi for his league debut – Welcome to Italy – to reflect not his arrival in the country, but his journey north of Rome. Bertoni netted on his first appearance but it wasn’t enough as an uncertain performance sent Napoli and their Argentines back south with a 3-1 defeat.

Maradona was eager to prove something, but struggled to adapt. It didn’t take long before the new stars began to realise that the rest of the squad was filled with players belonging to the lower leagues. Serie A was packed with talent, with eight out of nine Ballon d’Or trophies going to players from the Italian top-flight from 1982 to 1990, including three picked up by French hero Michel Platini. So, despite scoring against Sampdoria in his debut at the San Paolo, Maradona had to wait until the fourth round before Napoli picked up their first victory.

Como left Campania with a 3-0 defeat, thanks in part to another great goal by Maradona. Combining neatly with Walter De Vecchi in a sweeping counter through midfield, Maradona ran on to a through pass to smash the ball into the opposite top corner. The pace of the counter-attack was highlighted by Maradona continuing his storm towards the fans, 20 yards behind the goal. Match official Maurizio Mattei, who had already awarded the first red card and first penalty in Serie A that season, was the first referee to ever book a player for celebrating out of bounds.

Defender Moreno Ferrario was impressed by his two new teammates: “Diego scored a fantastic goal. It was a great goal, also because of the build-up play and then that final execution…”

The President started to see glimpses of the 22bn lire he had spent and coach Rino Marchesi was convinced it was just the start of something big: “Now we want to follow it up by improving further, it was a good performance and everybody played at a good level. Finally, we scored, which was important for us.”

The following match’s Week 5 trip to the Olimpico on October 14, 1984 saw Maradona face Batista for the first time since a controversial sending off during the 1982 World Cup in Spain. Frustrated because of poor refereeing and on their way to a 3-1 defeat against their bitter rivals Brazil, Maradona had kicked Batista to receive a straight red.

This on-pitch reunion between the duo over two years later coincided with a campaign against violence in and outside of the stadiums – throwing flowers to the stands, encouraging to ‘put your flowers in your cannons’ and sending a clear message for peace.

Azzurri goalkeeper Luciano Castellini had conceded a goal after injuring himself during the first half and was subbed after the break, but Maradona and Bertoni combined beautifully yet again, as Diego chested the ball down to the former Viola winger, who gave it back with one touch and let Maradona conclude with a neat finish in the corner for the full-time result of 1-1.

Ultimately, Napoli were lucky that the match ended in a draw, but the moment when Maradona and Batista embraced each other in the centre-circle was the gesture that stood out on the night.

“It’s a moment from the past,” Batista said after the match. “We talked to each other and cleared the air, this was about Lazio-Napoli, but me and him had this episode from the World Cup. I understood and forgave him, he came to tell me it wasn’t anything personal.”

But the poor trend continued for coach Marchesi and his men, going on a winless run of five games before picking up two important points against Cremonese, one of only two teams behind Napoli in the standings at the winter break.

Napoli lost 2-1 to Inter and Roma in December, before going down 2-0 at the Stadio delle Alpi ahead of the holidays. Maradona spent them in Buenos Aires, but the results at Napoli were embarrassing, so much that he avoided talking about the Partenopei during his vacation in South America. Napoli had nine points after 13 matches and sat one point above relegation.

The fans had started to lose faith. The belief was disappearing in the city, but they intended to give it another push after the break. Udinese visited Naples on a rainy day in the south. A waterlogged pitch met the players for their first game of 1985.

The ball stopped in every puddle along its way and the match became scrappy due to the terrible conditions. Udinese had the chance to go ahead with their first attempt on goal, as the Friulani were awarded a penalty after 12 minutes. Edinho grabbed the opportunity and sent the visitors ahead.

The air went out of the balloon at the San Paolo, but the players kept running, fighting and knocking on the door, time after time, trying to get back into the game. In the end, Maradona sent the goalkeeper the wrong way when he converted another penalty, this time awarded to the home side. After 22 minutes, it was 1-1.

Bertoni then scored a screamer from the edge of the box to give Napoli a 2-1 lead after 40 minutes and the Partenopei had turned the game around. It only lasted for three minutes, when Paolo Miano smashed in an equaliser with a long-range volley.

After the break, the horrible weather cleared up and Napoli took control of the game. The home fans were calling for a third penalty early on in the half, but the referee waved play on. Bertoni and Maradona spurred on their teammates and Napoli eventually claimed the third penalty of the match. Udinese players tried to play mind games with the Argentine, who admitted to reporters after the match that they had been insulting him. He sent the goalkeeper the wrong way again and claimed the Friuli players were ‘only crying’ when he had to respond to their reaction.

Udinese had a man sent off for dissent and Bertoni scored his second of the night, when his header made it 4-2, and despite a huge mistake by Castellini in goal, the match ended in a 4-3 win and Napoli were off to a great start on their return to the pitch in 1985.

“In these conditions and on 4-3, we even risked drawing the game,” central midfielder Paolo Dal Fiume said after the match, not convinced about their own performance. “The clock seemed to have stopped, I think the referee added a lot of time to recover from all the incidents during the match.”

But it was the turning point for the Azzurri. Maradona and Bertoni combined again the following round to give them a 1-0 win against Fiorentina and two vital points. It was Maradona’s third in two matches and the upswing continued.

Napoli started to pick up points everywhere. Drawing with league leaders Verona at home and at Sampdoria away, they won against Torino, before beating Lazio 4-0, a match remembered especially well for Maradona’s hat-trick that included scoring directly from a corner kick.

The Azzurri only lost one more game in the second half of the campaign, a 2-1 defeat to Milan, and bettered their winter position by five places, finishing eighth in the League. They beat Inter and drew with Juventus and Roma on their way to finishing the season with another 1-0 win against Fiorentina.

Maradona scored 14 goals in Serie A and ended third in the Capocannoniere standings, eventually winning the Guerin d’Oro prize, awarded by the Italian magazine Guerin Sportivo. Bertoni added another 11 to make the Argentine duo one of the most prominent in Italian football.

But rumour has it that Maradona entered President Ferlaino’s office asking him to sell all the players booed by the fans, to help Napoli grow even further… 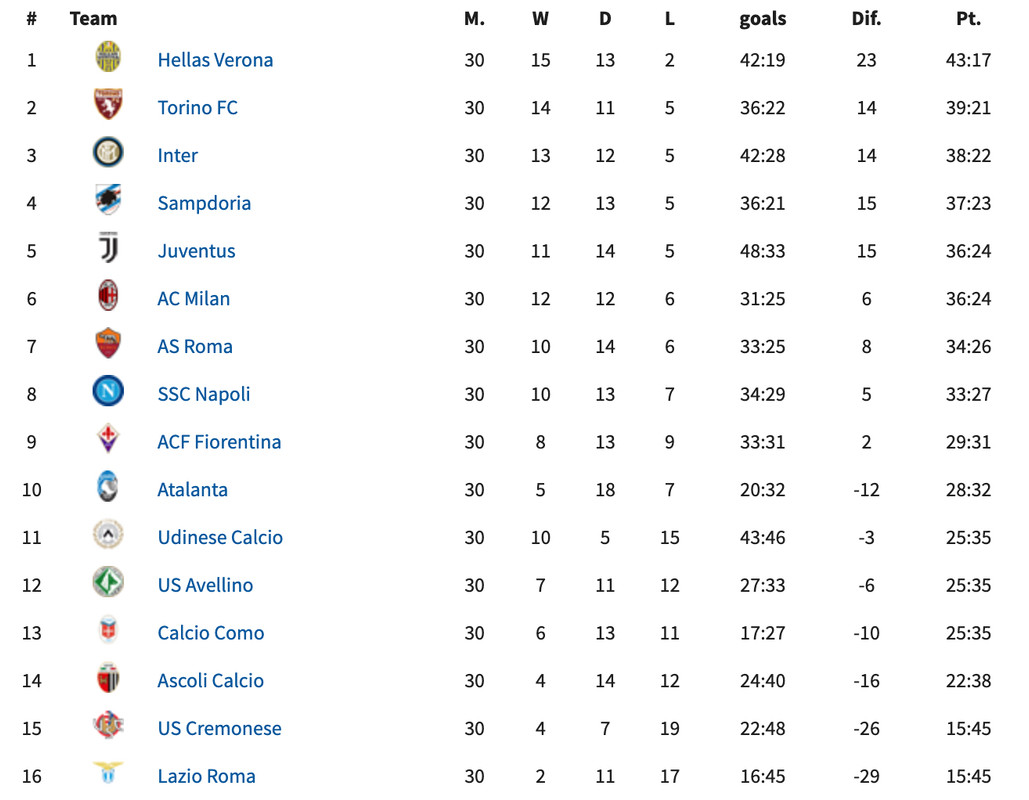 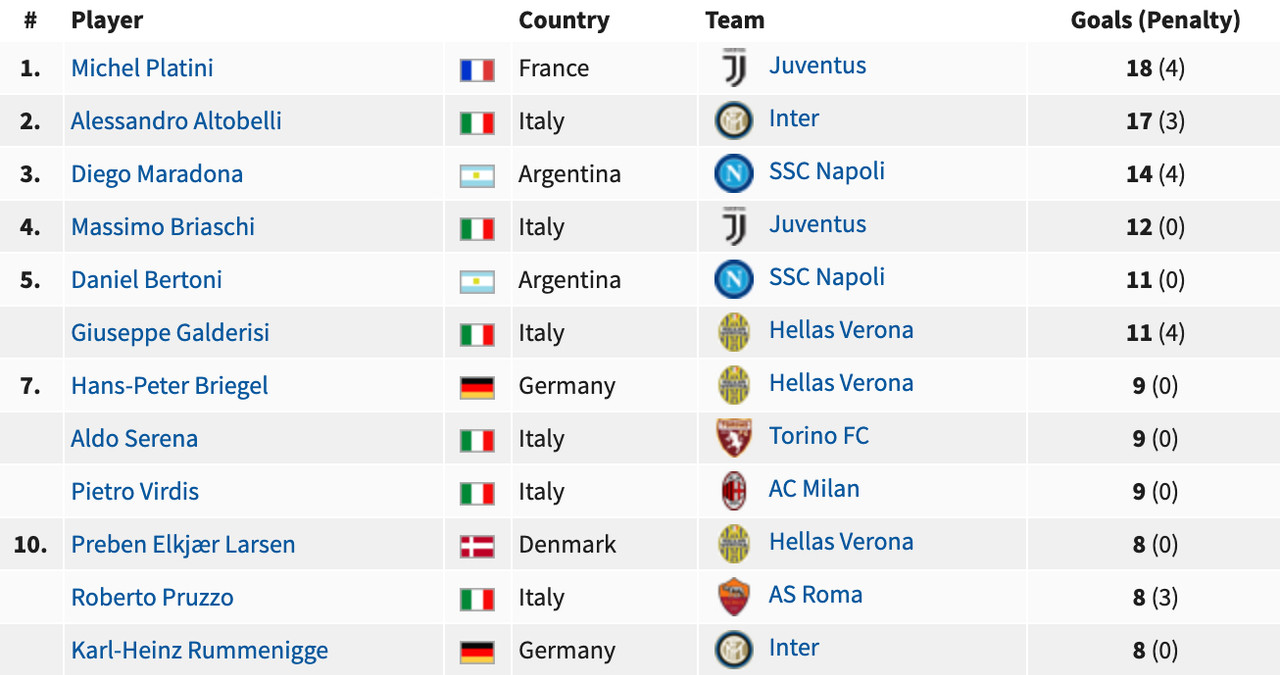 Article has reminded me I still haven't seen Asif Kapadia Diego documentary. Thankfully after quick search Channel 4 happen to have VOD available as of writing this. Really recommend to watch it! Depicts this and following seasons of amazing player, rise to fame and demise. I was born in late 80's and so grew up before internet era, only knew about him from my dad. Glad finally, I was able learn about his phenomenon.