Underdog stories don’t get much more spectacular than when Cagliari won their only Scudetto, inspired by their talismanic striker Gigi Riva…

Cagliari goalkeeper Enrico Albertosi stepped off the line and made himself big enough to get Juventus forward Pietro Anastasi’s effort from the penalty spot within reach. He stretched for it, pushed it wide of the target to a short-lived moment of jubilant scenes from the Casteddu players, only for referee Concetto Lo Bello to order the penalty to be repeated. “I saw the world come crashing around us.”

The Scudetto battle had come to a direct clash between the Old Lady and Cagliari in Turin on March 15, 1970. The Sardinians were one point ahead of the Bianconeri and the anticipation ahead of the big match had painted both cities in their respective colours.

Cagliari started the afternoon in the worst possible way. An own goal by Comunardo Niccolai gave the hosts an early lead. But a determined Rossoblu pulled one back right before half time and talisman Gigi Riva wanted to keep it that way.

“The game was like a fairy-tale for us, because it would be decisive for the rest of our season. We were one point ahead of Juventus and everyone was waiting for the direct meeting between the two sides,” Riva said. “Avoiding defeat in Turin would mean winning the Scudetto.”

The two sides came out after the break, one eager to protect the point away from home, the other needing the win to surpass the other in the Scudetto fight and midway through the second half, Juventus were awarded a controversial penalty by Lo Bello.

The Cagliari players protested wildly, but Lo Bello was determined. The penalty was given, and the islanders had to accept the decision. “Juventus got this penalty that nobody saw or understood, and after a lot of protests we had to accept it.”

Albertosi saved the first attempt, so another furious row followed when Lo Bello ordered the spot-kick to be retaken and Anastasi finally scored. Juventus, in that moment, were up 2-1 and League leaders in Serie A 1969-70.

“The outburst [against the referee] was because all the sacrifices we had made seemed to vanish because of a penalty we felt never existed and then surprised everyone by somehow letting them take it again. I saw the world come crashing down around us. The sacrifices we had put in for a year, seemed to disappear into nothing.”

The players were fuming against Lo Bello, as they felt Juventus had been gifted the advantage, but were motivated to hit back, already having equalised once in the game.

And 10 minutes before time, Cagliari were awarded a penalty of their own. Up stepped Riva, the Italy international who had rejected a lucrative move to the Bianconeri in order to help Cagliari in the battle for their first Scudetto.

He put the ball on the chalked spot and “kept dead calm in the moment”, the finish not of the finest by the man also known as Rombo di Tuono (rumble of thunder). Bianconeri ‘keeper Roberto Anzolin got a hand to it, but fumbled and it crept underneath him. Time stopped, the ball was moving in slow motion across the line and into the net.

“It was the turning point in our Scudetto run.”

Over 50 years ago, Vice-President Andrea Arrica had gathered the troops at Amsicora and led them to Serie A spearheaded by the Italian superstar Gigi Riva, who admitted he thought he would have headed off by then. But the superstar had rejected a move to Juventus to stay in Sardinia and Arrica poked the opponents: “Our only problem is that we annoy the rich.”

Riva had arrived when the Rossoblu were in Serie B, for his first experience as a professional football player. It was because of Arrica’s friend working as a police officer in Avarese that he ended up on the island.

“I was terribly scared,” Riva admitted about going from Lombardy to Sardinia. “I had to take the plane for the first time and Sardinia was almost seen as a place of punishment at the time. I was thinking that I had to improve as soon as possible to grant a return to Legnano.”

Riva convinced everyone in Sardinia and grew into a cult hero in Italy after helping the nation bring home their first (and to date only) European Championship in 1968.

But with the first brick in place, Arrica needed the second big signing and he arrived in the form of coach Manlio Scopigno. He returned for his second stint as head coach of the Rossoblu in 1968 and kept pushing Cagliari up the table, eventually finishing second behind Fiorentina and with Riva as Capocannoniere.

Despite being hungrier than ever and filled with belief from last season, Cagliari started the 1969-70 campaign with a 0-0 draw against Sampdoria in Genoa.

But Scopigno’s men rose to the challenge they had set for themselves, ‘believing’ they had a team ‘good enough’ to compete for the Scudetto. A run of four wins followed, culminating in the 1-0 victory away to reigning champions Fiorentina.

“That’s where we built the success that would follow,” Riva said of the unbeaten run of 11 games, which came to a halt with a 1-0 defeat to Palermo on December 14. During Christmas, another two draws came and hampered the mood at Amsicora.

The turn of the year and the non-existent winter break gave Cagliari another push, with five wins in a row. That included 4-0 thrashings of both Sampdoria and Brescia, before drawing with Fiorentina in February.

Inter threatened to stop the Rossoblu by handing them a 1-0 defeat in Milan, but Riva and the heroes of Sant’Elia beat Napoli 2-0 at home, before taking points against Roma and Juventus away.

With three rounds to go, on April 12, 1970, Bari arrived at Amsicora. The old stadium was packed with 28,000 spectators and staggering revenue for the time collected. Cagliari were the big favourites in their own game, but for them to win the Scudetto, Juventus had to lose against an in-form Lazio in the Italian capital.

“Without any doubts it was an unforgettable day,” former Vice-President Arrica said 28 years later to Sardegna Uno. “It seems like yesterday. A match I remember from the first minute to the last, a beautiful game against Bari.”

However, Bari hadn’t come to Sardinia to defend for a point. The Apulians showed great attitude and proved a bigger challenge than expected by the home fans. Cagliari were without influential midfielder Ricciotti Greatti and Bari were looking to take advantage of his absence.

In the 39th minute, Riva approached midfielder Mario Brugnera as he stood on the ball ready to take a free-kick in the last third of the opposition half. Animated in his explanation, he showed Brugnera where he wanted the ball. The mezz’ala smashed it towards the near post and Riva dove forward to direct the ball in the back of the net. Cagliari were in the lead, but Lazio were still unable to break Juventus down in Rome.

The people in the stands were following Cagliari on the pitch whilst nervously listening in on ‘Tutto il Calcio Minuto per Minuto’ with Sandro Ciotti on the radio. Juventus were holding on, but the two points were not safe at Amsicora either. Bari attempted to hit back.

In the 52nd minute, the stadium erupted. Juventus goalkeeper Roberto Tancredi has been beaten by Giampiero Ghio. Lazio were in the lead.

“Poor [Il Corriere dello Sport journalist] Ezio De Cesari was waving and told me Lazio had scored,” Arrica recalls. “He came running down from the stands.”

Lazio went on to increase their lead with a second goal by Giorgio Chinaglia from the penalty spot. It was all down to Cagliari to hold on to their lead.

In the 88th minute, Cagliari attacker Sergio Gori received the ball in the last third and made his way into the penalty area, dribbling first one, then two and beat the goalkeeper to make it 2-0 and put the last nail in the Bari coffin. The Rossoblu had won their first title with two fixtures remaining.

“Then I heard Ciotti was screaming on the radio, ‘Lazio have beaten Juventus, and Cagliari have won the Scudetto’. 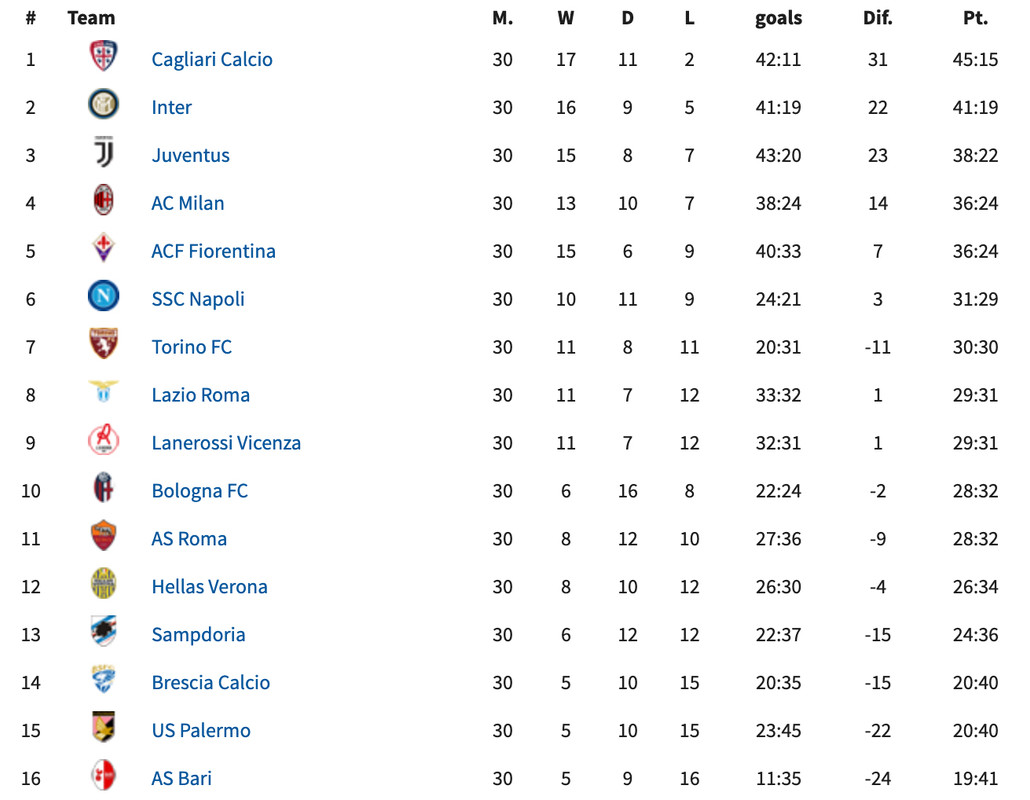 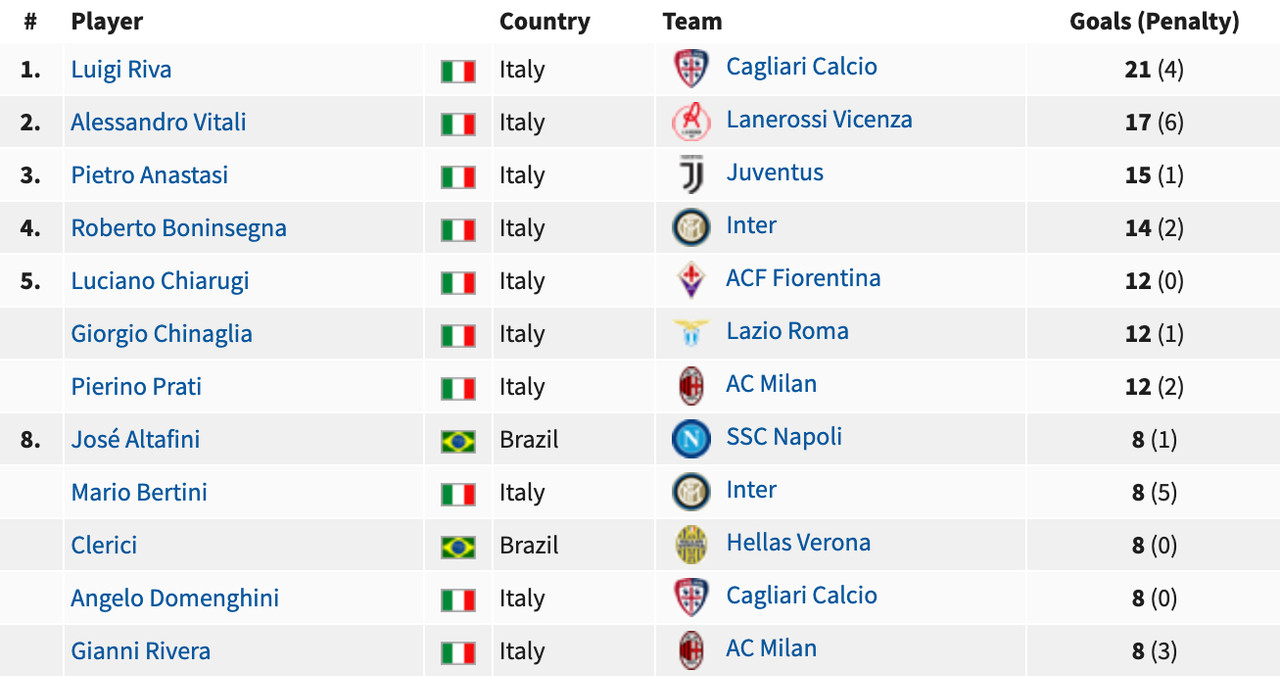 Have your say...
AC Milan Fan