It seemed impossible to follow in the footsteps of Arrigo Sacchi, but newcomer Fabio Capello achieved an historic record with the Invincible Milan…

At the final whistle, Rai Sport journalist Jacopo Volpi storms the pitch to be in on the jubilant scenes, chasing the players as they were jumping up and down, hugging each other, with Volpi on their tail screaming into the microphone: “They said you were finished!”

He grabs Roberto Donadoni, who can’t hear what he said and makes Volpi repeat himself: “They said you were finished, well past it!”

“Let them talk, our results speak for themselves,” Donadoni replied and ran towards coach Fabio Capello.

It started as a mission impossible for the young coach. At 45, Capello took over after Arrigo Sacchi, the icon and legend who had won back-to-back European, Intercontinental and European Super Cups, one Scudetto and the Italian Super Cup, immortalising the Rossoneri through their class and elegance on their way to the top of the world.

The former assistant had never been a first team coach, given only seven games as caretaker to conclude the 1986-87 season, acting as consultant to Nils Liedholm first and Sacchi later. He took over a side full of achievers, but most of them late in their career and believed to be at the end of the road.

Legendary Sacchi later revealed that he “wasn’t enjoying it anymore”, as he quit Milan to take over as Italy CT in 1991, but leaving with rumours about having tried to rebuild the team and met by a reluctant President Silvio Berlusconi, who was not willing to back the coach on the transfer market.

The fans didn’t want to see Sacchi leave and the news about the change of tactician at San Siro came as a shock to them. At first, they were reluctant to accept that Fabio Capello should take over, but mostly because they wanted to remain under the command of the man who had brought Milan to the top of the world.

Capello had huge boots to fill and during pre-season, he was interviewed by Rai Uno with no lack of confidence. “I expect a lot from everyone. I expect to play a great championship and a great desire to return to the top of Europe, to the top of Italy. First Italy, then Europe and then the World.”

But the sceptics had prepared themselves. The players were deemed too old and tired, and the approach of Capello seemed quite different to the one they were used to under Sacchi.

The new coach arrived with a more defensive approach, playing a compact 4-4-2 and giving a bigger responsibility to the four midfielders and the four at the back. He asked less of the strikers and more of the other eight.

Sebastiano Rossi in goal was protected by some of the greatest defenders to ever grace Italian football, led out of the tunnel by Il Capitano himself, Franco Baresi.

Before the season started, Capello reassured the ageing centre-half that he would be an important part of his side and continue his legacy even if the press wanted them to renew.

“He was the man who took the baton of Gianni Rivera and leapt into the hearts of the Milanisti. And that’s massive, he always remained here, even when things were not going well. It must be said that Franco Baresi is a true club icon of Milan.”

Capello had fired up his group, told them to “prove the critics wrong, that they do have a future and can still win together” and the players followed his lead, but teething problems created more problems for the former assistant.

An own goal helped them to a 1-0 win against Ascoli away in the first round of fixtures and despite leaning on the ageing backbone in the squad, Demetrio Albertini was the one who caught the attention by replacing Carlo Ancelotti in the side.

It was expected that Ancelotti would play his last season at Milan and Capello had introduced his successor, who showed great skill in his position just above the defence, immediately being compared to his retiring teammate.

“He complimented me, like all the others,” a proud Albertini said about being compared to Ancelotti after the first game. “Tactically, I play the same role of Ancelotti, in front of the defence to direct the squad.”

Another 1-0 win against Cagliari at home followed and got them going, but then three consecutive 1-1 draws with Juventus, Fiorentina and Genoa, and the lack of goals from open play all worried the fans. Only penalty goals from Marco van Basten could help them secure an unbeaten start to the season.

“We are very slow. When you are that slow, you can’t do anything,” Gullit exclaimed after the opener with Fiorentina. “When the opponents drop deep like that, you must play the ball faster, change the positions. We have to find the gaps, but we were very static.”

The frustration seemed to hit the players. The coach needed a convincing win, and it came against Atalanta in the sixth round. Marco van Basten opened from the penalty spot, yet again, but the new kid on the block Albertini smashed the second in the top corner and became their first goal-scorer from open play.

The Dutch stars kept the machinery running for the Diavolo with decisive performances, and after eight rounds the Diavolo had won five, with Ancelotti back on the pitch. Capello predicted Carletto could become a great coach and had suggested in the media that he wanted to have the midfielder as his assistant when he decided to hang up his boots.

“Don’t joke like that,” smiled the 32-year-old midfielder when approached after the 1-0 game against Bari. “It makes me laugh. I’m still a player, fortunately and today I managed to demonstrate it. Capello is doing well on the bench and I’m feeling good on the pitch when he gives me the opportunity to play.”

There was still some oiling of the gears to do, but Milan followed with a 2-0 win against Sampdoria and a 3-1 triumph over Cremonese, before Inter held them to a draw in the season’s first Derby della Madonnina.

Halfway through that campaign, nobody believed Milan would be breaking records. They had 29 points, three more than Juventus in second, 12 wins in 17 games, five draws and no losses. Capello explained he had been convinced from day one.

“I found a healthy Milan, they have rediscovered the determination from their best years and compete with the capacity to not give anything away for free, in any moment. When they go ahead, they still try to extend the lead and give us a show.”

Marco van Basten had been the star of that spectacle and had already bagged 13 goals in the first half of the season, comparing that to his 19 overall the year before, he was storming out of the gates.

“I need to admit that we have been awarded more penalties this year and that, of course, matters a lot. But we are doing really well,” he said after the 3-1 win against Foggia in January.

Milan had yet to concede more than one goal a game so far and with a 4-1 win against Cagliari, made sure to win their first six rounds in 1992. However, just as at the start of the season, Juventus, Fiorentina and Genoa held firm for stalemates.

The journalists started to ask questions about their dependence on leading goalscorer Van Basten. When the Dutch superstar didn’t deliver, Milan weren’t convincing. But when he did, they made sure to win three in a row, culminating with his 100th Serie A goal, and ironically his first, according to him, from a free-kick against Bari on March 15, something he took great ‘satisfaction’ from.

In the same home game, Capello led the team to a 25th consecutive game without a loss in Serie A, beating the record set by Sacchi, and really started to get the fans going.

“We are happy, not so much because of the record, but because we managed to win the game,” Capello told Rai Uno after the match.

Two rounds later, when Sampdoria were thrashed 5-1 at home, Juventus lost points to Torino in the Derby della Mole, helping the Rossoneri get even closer to the title. After a small setback against Cremonese in Lombardy, Capello picked up his first win in the Derby della Madonnina.

A 1-0 victory against Inter prepared them for the run-in and after beating Lazio 2-0 at home two rounds later, a match that included the introduction of new signing Jean-Pierre Papin to the Rossoneri faithful and a look at what’s next to come at San Siro, Milan were only one point away from securing the Scudetto by a landslide.

In his first season as head coach, Capello picked up the trophy against Napoli at the San Paolo. The ageing stars had two games remaining of the season and Ancelotti sealed his retirement by scoring twice in a 4-0 thumping against Hellas Verona, before the Rossoneri went on to ridicule all the critics of their ‘negative’ style with an 8-2 win against Foggia. That was the last match of the season and only the second time they’d conceded two goals.

Van Basten claimed the Capocannoniere title again, but this time with 25 goals and the remarkable season was only the start of an incredible era under the future England coach. The unbeaten run stretched until 58 games and far into the following season, still the longest unbeaten run in Europe’s top five Leagues, securing the first out of four Scudetti under Capello. 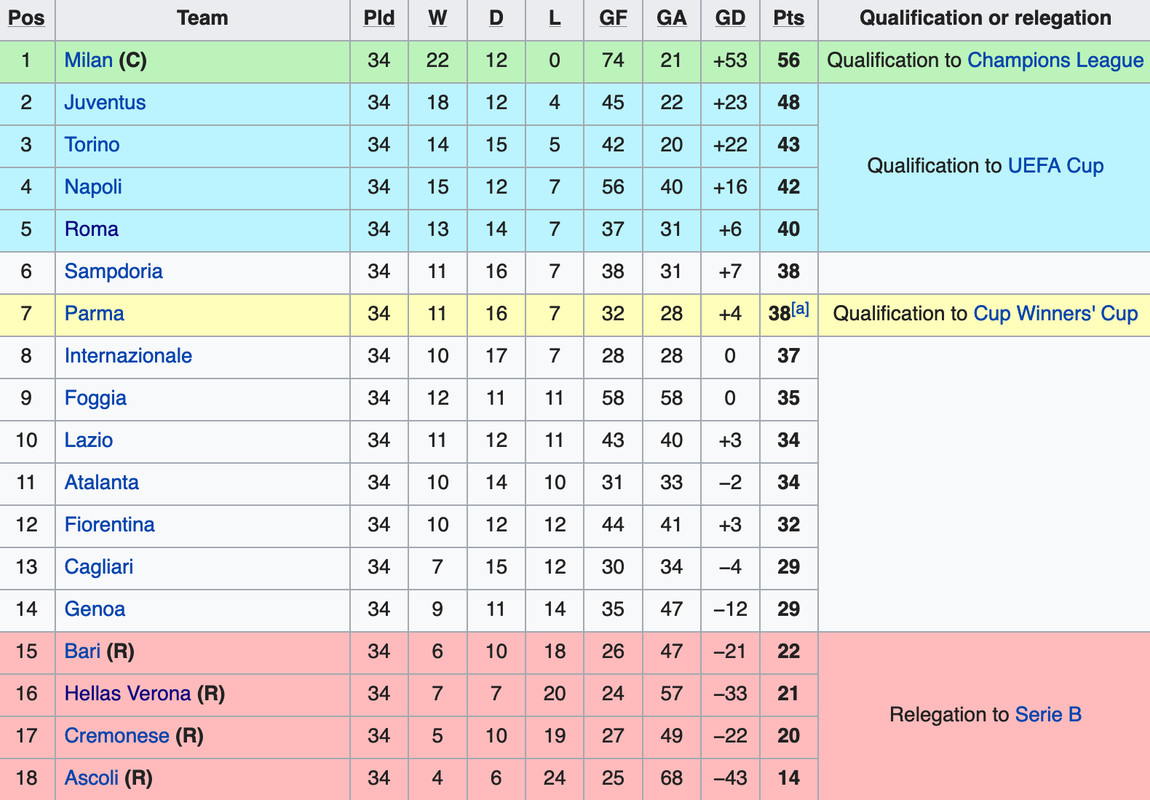 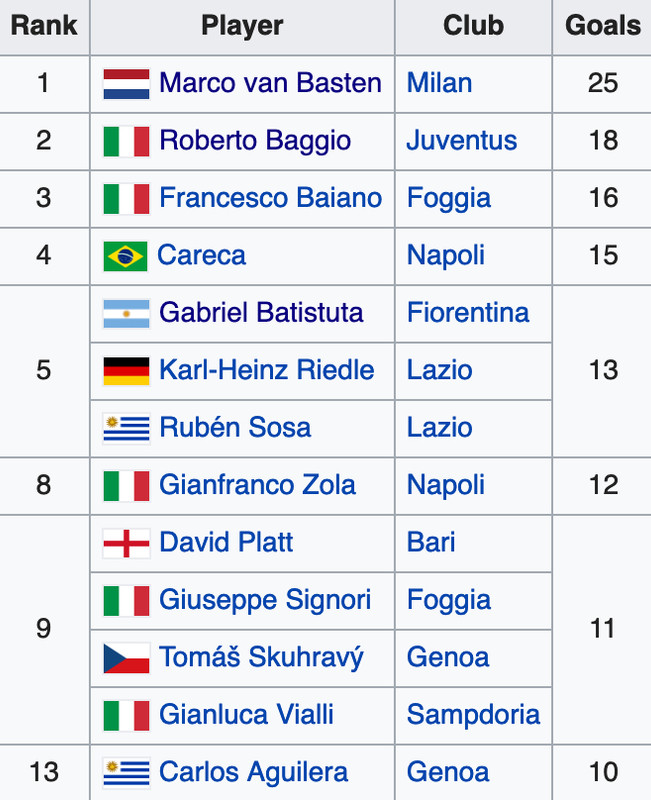 Have your say...
AC Milan Fan

If van Basten hadn't suffered those ankle injuries that Milan side would have gone down as the best of all time. He missed all of 93-94 and 94-95, and he had already suffered two injuries to the ankle by the time of the 93 CL final, where he suffered the 3rd injury to end his career at age 30. Surely, had he been 100% we would have won that final, as well as in 95 vs. Ajax, and would have been more competitive in Serie A in 95-98, when we struggled for goals, only solved by Bierhoff in 98-99.

@Paolo you could always watch videos of him and I don’t mean highlights as those just show goals but not the complete striker that he was in terms of sheer skill. Did Milan really get better I kinda doubt it as the next season they lost cl final to Marseille as Van Basten was mainly injured t, Gullit who was marginalised and not included in the cl final squad went to Sampdoria in Season 1993/94 which saw them score 36 goals in 34 games. Never really been a Capello fan. Much prefer Sacchi’s Milan

personally it makes me feel sad that i missed seeing van basten play or this great milan side really come together and get even better. to go unbeaten in serie a doesn't matter a group of players a team has that is a remarkable achievement.