May 1990 truly was the zenith of Italian club football dominance in Europe, as Vijay Rahaman looks back at their clean sweep of European, UEFA and Cup Winners’ Cups…

When Italy went into the 1990 World Cup as hosts, they did so with an unprecedented clean sweep of club trophies, having taken the European Cup, UEFA Cup and Cup Winners’ Cup during a glorious month of May. 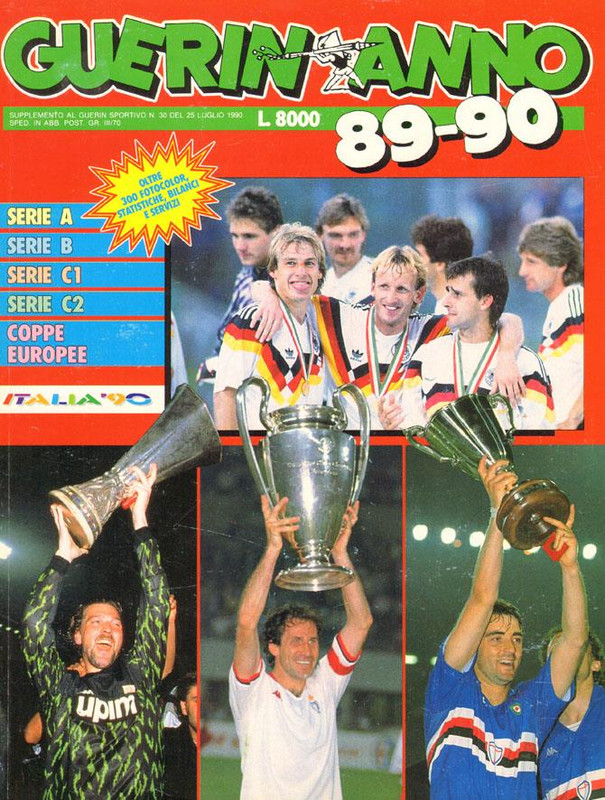 The first title to be handed out was the Cup Winners’ Cup, clinched by Sampdoria during the best period in their history. The Ligurians had lost the previous year's showpiece European Cup event to Barcelona by a 2-0 scoreline, but they took the pain of that final loss to put things right at the Ullevi in Gothenburg.

The Blucerchiati breezed past Brann, Borussia Dortmund, Grasshopper and Monaco, scoring 14 goals along the way and conceding just four, as they attacked and defended with equal ferocity. They faced off with Belgians Anderlecht in the final and the game was tight for the most part, with Roberto Mancini having a couple of decent chances for the Italians. However, it was scoreless after the 90 minutes and on to extra-time.

The deadlock was broken with virtually the last kick of the first period of extra time and it was Samp's star man Gianluca Vialli who would strike. Attilio Lombardo made a marauding run down the right, Fausto Salsano's shot hit the post, but Vialli was there to put in the rebound. They doubled their lead right at the start of the second extra-time period, as yet again Lombardo made a fantastic run on the right, Mancini crossed to striker partner Vialli and the man from Cremona headed home.

That was Sampdoria’s first and only European trophy and captain Luca Pellegrini lifted the Cup Winners’ Cup high into the Swedish night sky.

The second European final in 1990 took the dominance of Italian football to the next level, as it was practically a derby between hated rivals Juventus and Fiorentina for the UEFA Cup. At that time, it was played over two legs, with the 3-1 Juventus victory representing the last game at the Stadio Comunale – later to become the Stadio Olimpico Grande Torino – and the second in Avellino, the reasons for which we’ll get to later.

It’s never plain sailing when these clubs meet and they were both determined to get their hands on the trophy after middling Serie A seasons. The Bianconeri got past Gornik Zabrze in the first round by a 3-0 aggregate scoreline, but the tie is sadly remembered for the tragic passing of defensive legend Gaetano Scirea. The World Cup winner tragically died in a car accident as he was on a scouting mission to Poland.

Juve's team was dominated by the presence of Portuguese play-maker Rui Barros, Pierluigi Casiraghi and soon to be a hero in the World Cup Salvatore ‘Toto’ Schillaci. They swept past PSG, Karl Marx Stadt (now Chemnitzer FC) and Hamburg in the following rounds, which included a highly impressive 2-0 away victory against the latter in Germany. They overcame another German side Koln in the semis.

The Tuscans’ path to the finale was scrappy at times, as they overcame Atletico Madrid in the first round via a penalty shoot-out, with a certain Roberto Baggio scoring the decisive spot kick. Further close contest wins over Sochaux, Dynamo Kiev, Auxerre and Werder Bremen meant the first European final for the team in purple since they triumphed in the Cup Winners Cup in 1961.

That semi-final with Bremen was a dramatic affair, as Viola fans threw fireworks, staged a pitch invasion and confronted goalkeeper Oliver Reck. It wasn’t even their stadium, as the Stadio Franchi was undergoing renovations for the 1990 World Cup, but those actions got Perugia’s Stadio Curi banned too. So Fiorentina had to decamp all the way down south to Avellino, near Naples, for the second leg on May 16.

The first leg of the final was hosted by Juve and a typically feisty affair. Roberto Galia scored the opener after being set up by Schillaci. The real talking point of the final would occur on the hour mark, as Juve doubled their advantage. Casiraghi converted from close range after Angelo Alessio's shot found its way to the striker. Casiraghi had seemingly pushed Celeste Pin, but the goal stood.

Riot police had to be sent into the stands after the away supporters started protesting the decision. That incident came less than 10 years after Viola fans felt aggrieved that they were denied the Scudetto by the same side, similarly in controversial circumstances.

Their players lost focus, Luigi de Agostini made it 3-1 for La Vecchia Signora and Fiorentina had it all to do in the ‘home’ leg, which was even further from Florence than Turin had been.

In that second leg, both teams sparred, with Juve perfectly content to sit back and soak up the Fiorentina onslaught. However, despite Carlos Dunga again pulling the strings, the ‘hosts’ failed to convert the few opportunities that were created, with Baggio kept quiet for most of the game. Juve could have had a penalty themselves to add to their advantage for a Sergio Battistini push on Schillaci, but it meant little as the team in white and black held on.

Juve's goalkeeper Stefano Tacconi, who was captain on the night, lifted the trophy in what proved to be Dino Zoff's last game in charge of the club.

The third and final title to be decided was the European Cup. Heading into that season, AC Milan were the defending champions, after they destroyed Steaua Bucharest by a 4-0 margin at Camp Nou in 1989. The Rossoneri started as favourites to defend their crown, but their path to another final in Vienna was far from straight-forward.

HJK Helsinki was overcame easily enough, but they needed a stalwart defensive display to overcome Real Madrid at the Santiago Bernabeu, after a 2-0 win at San Siro. In the last eight versus Mechelen, the first leg in Brussels ended scoreless and in the return in Milan, the home team required two extra-time goals from Marco van Basten and Marco Simone to go through. In the semi-final match of European heavyweights, a Van Basten penalty gave Diavolo a slender advantage against Bayern to take to Munich. However, they required a goal in the 100th minute from the late Stefano Borgonovo to overcome the Germans on away goals.

Struggling as they did, Milan were in a second consecutive European Cup final and they would face Benfica, in a re-match of the 1963 final, won by the Lombardy side. In 1990, Milan were originally going for the Treble, but finished second to Napoli in Serie A and lost the Coppa Italia final to rivals Juve, so they were just left with Europe. Their manager Arrigo Sacchi was fully aware that his troops were not at their best as they headed to Vienna, especially as they played virtually the entire campaign without star man Ruud Gullit.

Nevertheless, Sacchi shocked all and sundry and started the Number 10 versus the Lisbon side. The defending champions kept to their attacking intent, despite being clearly tired at the end of a long campaign, while Sven Goran Eriksson’s Benfica tried to hit them on the counter.

The lone goal of the clash came from a move that Sacchi would later say they worked on 30 to 40 times in training. Alessandro Costacurta carried the ball forward 20 yards, passed to Van Basten who came deeper, Frank Rijkaard pushed forward from his midfield position and was fed through by his countryman to net with the outside of his right boot.

It was going to take something special to score and Milan had provided that moment. The Portuguese side never came close to equalising and in fact Gullit had two great chances to add to his side's advantage.

Milan had won back to back European Cups for the first time in their history and Franco Baresi gleefully accepted the trophy. It might not have been the Rossoneri’s Treble, but it was an Italian Treble of European trophies that will remain an extraordinary achievement.

Have your say...
Anonymous

But, I don't think it's a simple matter of just building new stadiums.. it is crucial, but it must be done in conjunction with modernizing the business models... outdated marketing approaches and rule by the thugs has to change

now imagine if Italy won the world cup 90 like they prolly should along with all major trophies at club level...that would have of been some feat.

The 90's were great for italian football no doubt. Though more EC's should have been won. Rubentus choked 2 times though.

You've probably mentioned this but English champions were banned at this time so this awesome achievement is slightly tainted. Also, one of the best English teams in terms of entertainment, Everton, were denied a spot in the European Cup. A shame because sides like Liverpool had won so many trophies playing dire, boring (pass it square) football. I dare say if English teams played in 1990 they would have won a trophy on penalties, or by the odd goal or by some lucky fluke in the final minute.

Before Italy can rule the world the Italian clubs need to invest in new stadiums. The politicians most give permission to build and forget their own greediness.
The following six clubs must build as follows:
Inter and Milan a 64.000 seater.
Roma, Lazio and Napoli a 51.000 seater
Fiorentina a 41.000 seater.
Then the top seven clubs, including Juventus, all have new stadiums.
The rest should aim at 18.000-30.000 seats.

jezz this is old vialli has a full head of hair.