On this day, in another dimension

Today was meant to be the final round of the 2019-20 Serie A season, so Martin Mork looked into the alternate dimension to predict what might’ve happened…

The 2019-20 Serie A season should have been completed this afternoon and the Scudetto would have been assigned to one of the top teams. Would it have been Juventus, Lazio or Inter? And would SPAL and Brescia have been able to climb out of the relegation zone if the season hadn’t been interrupted?

The title race was so perfectly poised for a dramatic climax to the campaign, reigning champions Juve just one point above the surprise outfit Lazio, with Antonio Conte’s Inter not far behind. The battle for the fourth Champions League spot was also wide open, along with Napoli and Milan comebacks for Europa League qualification, up against unexpected Parma and Hellas Verona.

Would Maurizio Sarri win his first title in Italy the year after picking up his first ever career trophy with Chelsea last season? Or was it going to be the culmination of Claudio Lotito’s project since he attended the Biancocelesti funeral and brought them back to life 16 years ago? Antonio Conte had returned to Italian football to pull Juventus down from the throne he brought them to in the start of the decade, but would he get the chance this year?

Today, we were about to witness the last round of fixtures in one of the most interesting Serie A run-ins since Juve conceded 20 goals in 2011-12 and set the standard for the 2010s by going through the season as the first ever to be unbeaten in the 38-match format in Italy’s top tier.

In the title battle, it should have been a dogfight concluded by a tasty set of games, as Juventus were scheduled to host Roma at the Allianz Stadium, Lazio were to travel down south to face Napoli and Inter were in for a short trip to Bergamo for the Lombardy derby with giant-killers Atalanta.

As the season has been suspended for over two months and we are still without a confirmed date for the resumption, I picked up my crystal ball and ran the predictions of the scores, starting with the Serie A Week 25 that hadn’t been concluded and ran through the ties like a cross country orienteer until I arrived at the last round of games, only to learn that I had messed it all up along the way.

I recalled my first season in the stands in a modified Stadio Sant’Elia, standing on scaffolding inside a historic ground, following the Casteddu down to Serie B. I was not going to let the fear of being dragged into another relegation battle affect my judgement.

After having started the season with an adventurous spell, short but still filled with joy at being placed among the top four even for just a little while, it was looking through their form since December.

I decided to bring my gut feeling into play, combined with the short study of the different form-patterns of the teams in the League. By Week 30 with the first obvious decisive meetings between European candidates Lazio-Milan and relegation battling Udinese-Genoa, the table started to take shape. Lazio were still holding on, despite having been held to a draw in the return to action by Atalanta.

As I continued plotting away results for big games like Napoli-Milan, Juventus-Atalanta, Roma-Inter and maybe even the title decider Juventus-Lazio in Week 34, I had eventually come to the last round of fixtures. The ones played this Sunday. The conclusion that has been postponed, the day we don’t know if will actually come…

Atalanta, through my predictions, have already become the highest-scoring side in Italian football ever, tied sixth with Liverpool in Europe and are expected to fight to keep fourth and qualify for another fairytale season in the Champions League.

Then I realise. The anti-climax was unbearable. What have I done? Caught up in the moment, I rewind to look at my results. It’s all there and calculated by my own predictions.

It’s 37 rounds of fixtures and a hypothetical table. Atalanta don’t have to fight for the Champions League against Inter, Roma can’t reach the top four even if they beat Juventus, who are already crowned winners with one game to spare. Lazio’s incredible run stopped at second. Not even at the bottom, no relegation fight. In my hypothetical table, the most incredible Final day might as well just be scrapped… 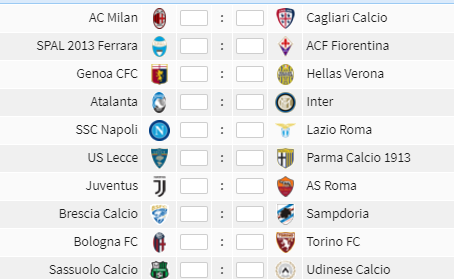 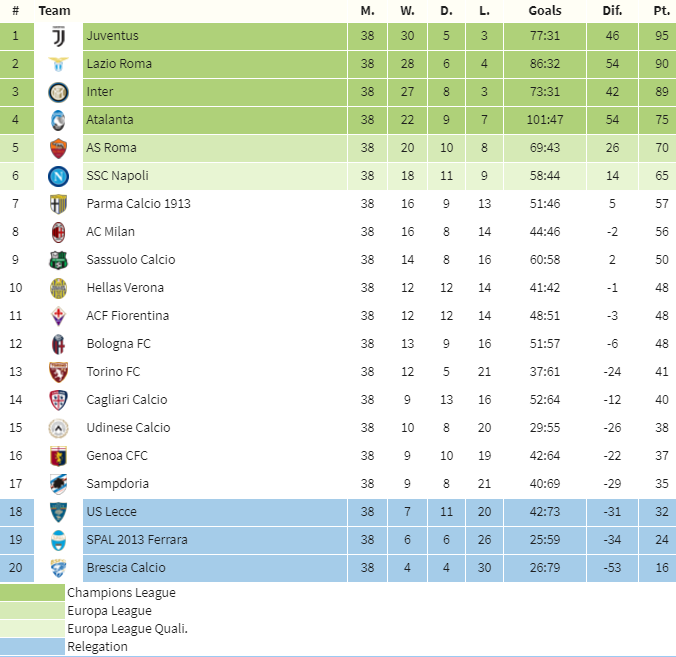 Wow how predictable someone commenting on Italian football through a crystal ball have Juventus as champions. Seriously do any so called journalists ever believe that another side can succeed in Italy?

I like very much that you did this, Martin. It was fun to read and I think it was a grand effort by you. I miss Serie A dearly, and have resorted to watching the Bundesliga to keep me from going insane! Looking forward to the transfer market as well.

2. Atalanta can lose next games against Lazio, Napoli ...with Roma taking their fourth spot...
...And then final halt occurs because of another corona spread!!!
Similarly, Lazio can re-take first spot or Samp gets relegated in next 2-3 games...


I honestly think they SHOULDN'T START AGAIN IF THEY DON'T PLAN TO FINISH!
Players/ staff need to be quarantined for a month if season is to be concluded. Sacrifices must be made.
We all know how irresponsible players are with their partying.

1. There are other variables...

Will teams play TWICE PER WEEK?

Will they be allowed FIVE SUBSTITUTIONS??
(Football with 5 subs is a whole different animal. Small teams can hold off Juve, but lose focus/ fall tired in second half. Some teams/ PLAYERS will be favoured if they allow this rule --Suddenly you can have "A PASTORE" playing 25 minutes ON MAX!)

LUCK? Incompetent REFS, even with VAR??
(Juve can have 40 shots against Lazio's 1 gifted penalty & lose a 7-pointer game!!!)

Wow, you have Lazio to lose another 2 games before the final round but Inter and Juve to go unbeaten? When was the last time Lazio lost in the league? Clearly someone hasn't looked at the form over this season.

well im happy to see the season and CL final conclude in summer since theres no EUROs to look foward to. funny thing is it was really a tight race between Lazio - Juve with Inter and Atalanta paying vital roles in how the season could end. im rooting for Lazio as prolly many are. cant help to think tho the long break is likely to be a monkey wrench.