A furious Cristiano Ronaldo posted a picture on Instagram insisting he feels fine, and then appeared to attack the PCR test used to detect Covid.

The Portuguese star will miss this evening’s Champions League clash against Barcelona as he still tests positive for Covid.

The Juventus striker caught the virus while on International duty on October 13 and although he’s always been asymptomatic he hasn’t recovered from it yet.

Ronaldo posted a picture on Instagram writing “Feeling good and healthy” but then he added a comment that put into doubt the efficiency of swab tests used to detect the virus: “PCR is bulls….,’ he wrote. 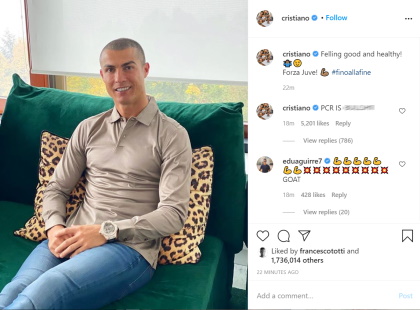