The Corriere dello Sport responded angrily to accusations of racism for its headlines, but in so doing claimed they were the victims of a “lynching.”

Despite both players and their clubs pointing out this was at best “highly insensitive” and at worst outright racist, the newspaper and their editor Ivan Zazzaroni doubled down.

They accused their detractors of having ulterior motives to spark controversy, suggested Roma and Milan only boycotted them because there were no interviews organised in the first place, then that other Serie A clubs had “called to show us solidarity.”

Now Friday’s edition of the national sports newspaper just seems set to cause even more damage with another extremely poor choice of words.

“Who are you calling racist? Lynching of a newspaper that for a Century has defended liberty and equality,” is the headline.

They have a collage of past Corriere dello Sport headlines about the scourge of racism and an op-ed by editor Zazzaroni.

“Black Friday, for those who want to and can understand it, was just a way of praising difference, the magnificent richness of difference. If you don’t understand that, it’s because either you can’t or are putting it on.

“Black Friday is the innocent headline of a newspaper, ours, that for almost a Century has been passionately and obstinately defending the values of sport. And yet it has been transformed into poison by those who have poison within them.”

Zazzaroni is more than a newspaper editor, as he is also a regular judge on the Italian version of Dancing With The Stars. 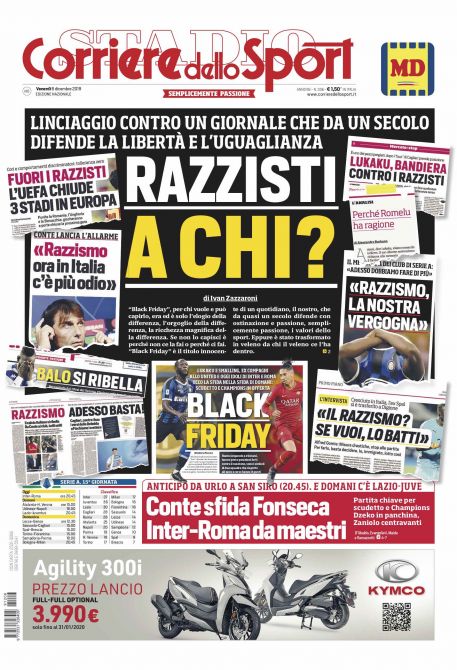