Felipe Melo has attacked Giorgio Chiellini again by referencing a social post to Juventus’ defeat to Galatasaray in 2013 with the song ‘Bye, Bye Baby’.

Melo is one of the two players Chiellini called ‘the worst of the worst’ in his new autobiography ‘Io, Giorgio’, due to be released on Tuesday.

Having already branded the defender a ‘coward who is still bitter’, the Brazilian published a provocative Instagram Story this afternoon.

The post is of Galatasaray’s 1-0 victory over Juve in the 2013-14 Champions League group stage, which resulted in the Bianconeri’s exit from the competition.

Originally uploaded by an Inter fan, it contains an action shot from the match and an emoji of a hand waving away a trophy, with Domenico Modugno’s Sanremo-winning song ‘Ciao, Ciao Bambina’ played in the background.

“I still enjoy it,” read the caption. 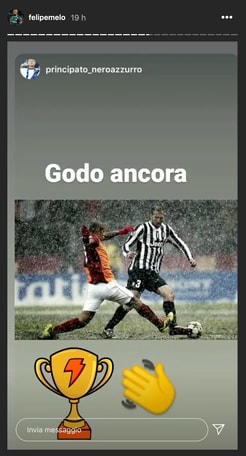